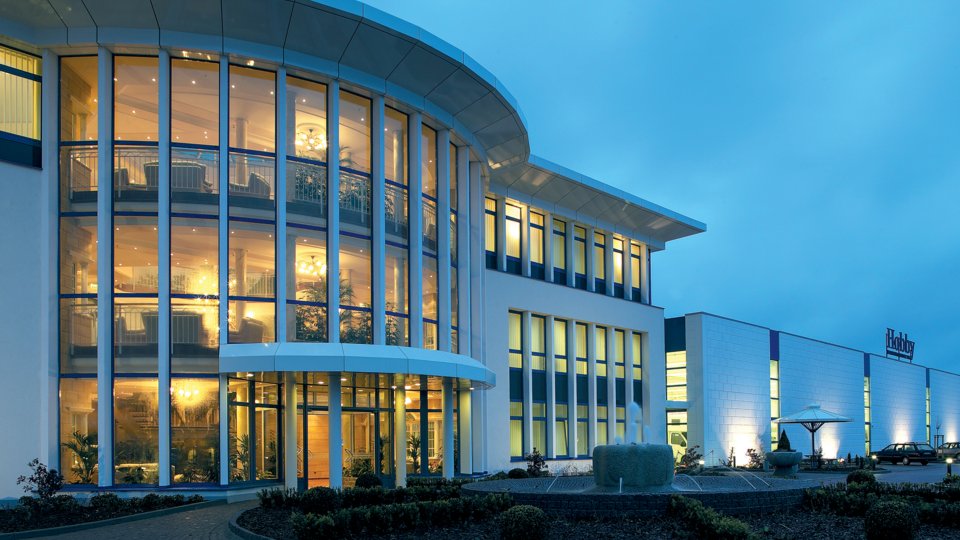 One man and his work

Hobby boss Harald Striewski celebrated his 80th birthday at the beginning of January. His company will be 50 years old in April 50. Time for a look back at the life and work of the company founder.

The story of Hobby is also the story of Harald Striewski, the founder and owner of Hobby-Wohnwagenwerk. And his story began long before he founded his company in Fockbek near Rendsburg in 1967. Harald Striewski came into the world on an estate in the rural district of Preußisch Holland on 7 January 1937. His maternal grandmother was an estate manager there, his father a farmer. The Second World War broke out two years later - with fatal consequences for Germany and Europe, and particularly for the people in East Prussia.

“At the age of seven, shortly before my 8th birthday, my mother, my younger brother by two years Hans and I had to flee from the advancing Russian army,” says Harald Striewski remembering the dramatic flight from his home in 1944. “We trekked as far as Stolp, then the Russians surrounded us and forced us back to Danzig,” explains Harald Striewski. There, the mother with her two sons stayed with her sister for two days. But the clock was ticking, the Red Army was moving unstoppably closer. “My aunt brought us to a large passenger ship which we were supposed to travel out on. It was the ‘Wilhelm Gustloff’,” reports Harald Striewski. The fact that the refugees did not go on board was thanks to the intuition of their aunt, who strongly urged them against travelling on such a large ship. “Every submarine will see that,” she said, and was right with her foreboding. On 30th January 1945, the “Wilhelm Gustloff” was sunk by a Soviet submarine off the Pomeranian coast. Around 10,000 people died in the ice-cold Baltic Sea. The Striewskis managed to get passage on a smaller ship, the “Cremon”. “My mother bartered all the food we had left, including a large ham, to get passage to Kiel,” says Harald Striewski.

Squeezed into the hold, the hatches closed, the ship sailed at night along the coast to Kiel. There, they found out from the crew of the “Cremon” that their ship had also repeatedly come under fire from the land and that the “Wilhelm Gustloff” had been torpedoed and sunk.

The following years were full of deprivations. The mother and her sons found quarters on a farm in a small village called Nübbel near Rendsburg. A servant's room measuring just seven square metres in which three beds stood on top of each other served as accommo-dation. “My mother slept on the bottom, I slept in the middle and my brother on top,” reports Harald Striewski. The refugee children did not have it easy in the village school. “The farmers’ children had butter and cold meat on their bread, we – if anything – had only margarine and sugar,” says Harald Striewski. To get by and to feed themselves the mother and her sons worked for a number of farmers, collected potatoes, bound sheaves and harvested turnips. The mother sold raspberries, blackberries and lilies picked by the sons, and self-made wreaths and key rings with Hänsel and Gretel motifs made from plywood by Harald Striewski in Rendsburg.

“This time shaped me,” emphasises Harald Striewski. “I’d have liked to have had a farm too, but that was inconceivable.” Instead, after school he did an apprenticeship as a shipbuilder, studied for a vocational diploma after work and then later studied at the engineering school in Kiel. All in a time when the working week was 48 hours, Saturday was a normal working day and annual holiday was limited to 14 days. Harald Striewski cycled the eight and a half kilometres between Nübbel and Rendsburg four times a day to travel to work and to the vocational college. That makes 34 kilometres per day and over 200 kilometres per week – a real feat. Nevertheless, on Sundays he played handball in a very good team “for relaxation”. A happy coincidence, because it was while playing sport that he met the love of his life, his wife Ingeborg. She was by his side until her death in September 2016, accompanying her husband for 60 years on his successful path. They experienced the rise of Hobby to become the caravan world market leader together.

This rise began with a dream. “In 1965, I dreamed of having my own caravan, which I wanted to build myself. Unfortunately, I didn’t have any money. But my aunt lent me 3000 marks. Which is how I was able to build the first caravan. I sold it for 6000 marks, gave the money back to my aunt and built a second, which I also sold,” explains Harald Striewski. He only went on tour to St. Tropez together with his wife Ingeborg and son Michael with the third self-built caravan. Harald Striewski also sold this caravan as soon as he got home.

“Although I only advertised once, I was now getting more and more orders and built caravans in the evening and weekends alongside my main employment as a shipbuilding engineer. I couldn't keep up both long term. So I asked my then boss for a year of unpaid holiday so I could work off the order backlog. And that’s how it’s been until today,” smiles the now 80-year old Hobby boss. When he founded Hobby in Fockbeck on 1 April 1967, Harald Striewski was just 30 years old. He called his company “Hobby-Wohnwagenwerk Ing. Harald Striewski GmbH”. It produced in a garage at Hohner Strasse 37 and was purely a family business. Harald Striewski built the caravans, his wife Ingeborg sewed upholstery and curtains and also took care of the bookkeeping.

After as little as one year the garage had served its purpose and the young company moved within Fockbeck. Harald Striewski acquired a 10,000 square metre site at Schafredder 28. A small production hall came into being here, where four employees worked. At the same time this was the start of series production at Hobby. The target back then, of making and selling one caravan per day, was reached as early as 1969. In 1970, 42 employees produced six caravans a day. In 1972, just five years after the company was founded, the 5000th Hobby rolled off the line in Fockbek. In order to protect the caravan chassis better against rust, galvanised chassis were used in future. From 1973, these were produced by Rendsburger Feuerverzinkerei, the second company founded by Harald Striewski.

Hobby developed rapidly in the following years and reached a provisional high in 1983, because in this year Hobby became the caravan market leader in Germany and Europe for the first time. Ground-breaking innovations, such as developing a transportable cassette toilet or introducing reversing mechanisms to the caravan sector, consolidated Hobby’s position as the number one caravan manufacturer, which it retains to this day.

In 1984, Hobby also began manufacturing motorhomes for the first time and made a real splash straightaway with the Hooby 600 designed by Harald Striewski. The elegant part-integrated model with the round side walls and the striking windows won the title “Mo-torhome of the Year” twelve times in the Promobil readers’ vote. Today, Hobby is one of the leading motorhome manufacturers in Europe and offers models for all important customer groups, from compact vans up to luxurious part-integrated types. The vehicles are produced in the modern Hobby motorhome plant, which started operations opposite the Hobby caravan plant in 2003. Both plants are in the Harald-Striewski-Strasse today, because since 2006 the Schafredder street has borne the name of the company founder.

Always worth a visit: Politicians such as Schleswig-Holstein’s Heads of Government Torsten Albig, 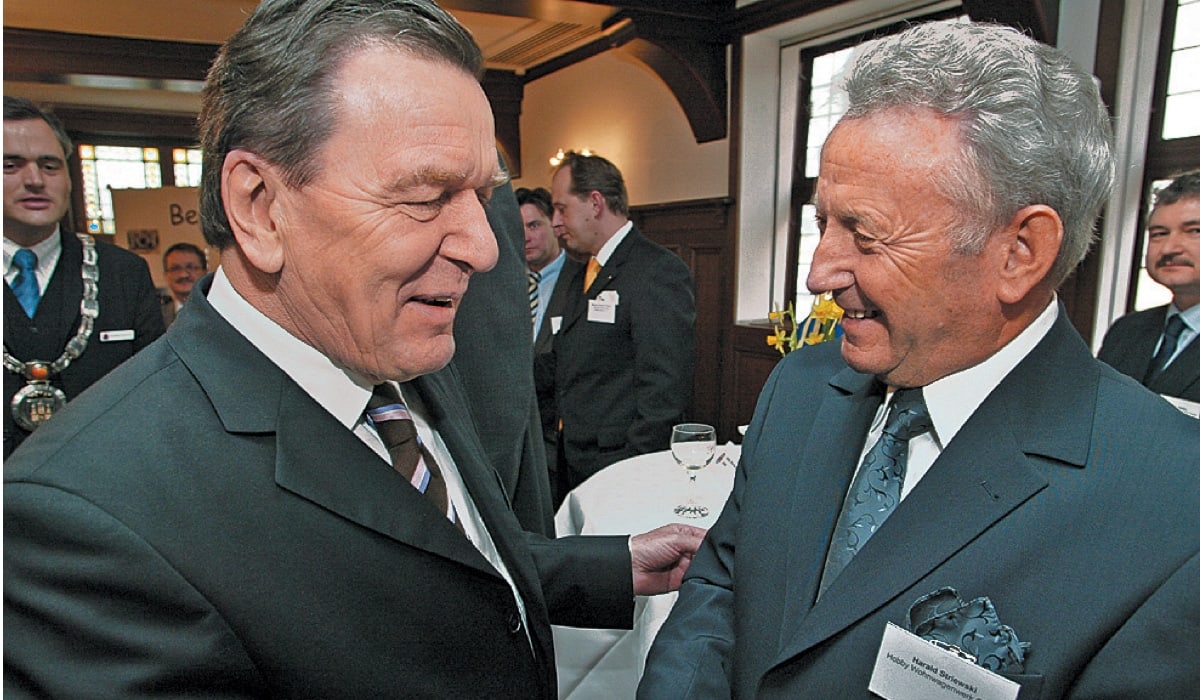 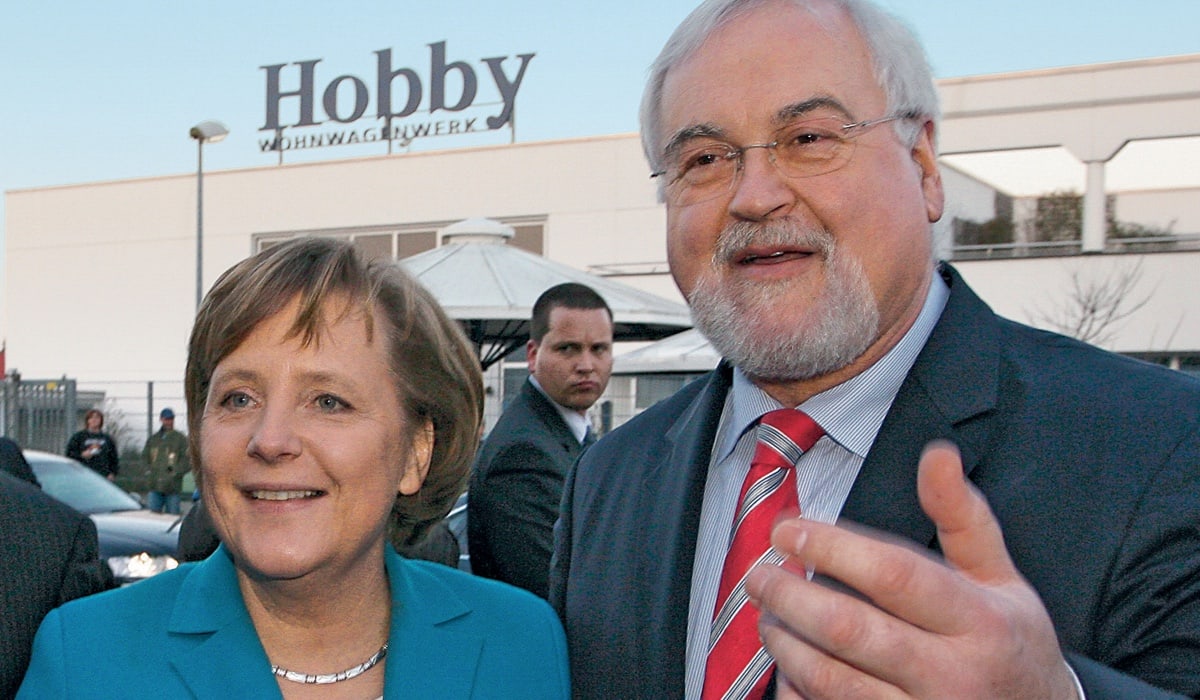 as well as Peter Harry Carstensen and Chancellor Angela Merkel, have all made their way to north Germany

The site covers a total of 260,000 square metres, of which 60,000 have been built on. Hobby currently employs more than 1,000 employees and is thus one of the largest employers in northern Germany. Since the company was founded, more than 550,000 caravans and nearly 30,000 motorhomes have been produced in Fockbek. A network of 350 dealers ensures extensive service throughout Europe. Today, alongside the Hobby brand, Fendt-Caravan GmbH from Bavaria, Rendsburger Feuerverzinkerei and Formlight GmbH based in North-Rhine Westphalia, which manufactures furniture components for caravans and motorhomes, belong to the Hobby Group. In Germany, the Hobby Group (Hobby/Fendt) has a market share of over 40 per cent in the caravan sector, of which 23.4 is down to Hobby. In Europe, the Hobby Group has a market share of over 36 per cent, more than 19 percent of which is accounted for by Hobby. Thanks to modern production sites and a wide and attractive model range Hobby is best equipped for the future. Hobby caravan customers can currently choose from among seven series and 57 model variants. The motorhome range extends from compact vans, through luxurious part-integrated models up to large family alcove vehicles.

1983 – Hobby becomes market leader in Germany and Europe for the first time.

1996 – Introduction of "All-inclusive equipment” for all caravan series.

1997 – Hobby celebrates its 30th anniversary with the entire workforce at the Kiel Schloss.

2007 – Hobby celebrates its 40th anniversary with a large street party.

2013 – With the Hobby CI-BUS onboard management system developed in-house Hobby presents an onboard network for leisure vehicles that becomes the standard for the entire sector.

2014 – Company founder Harald Striewskiis honoured by European trade journalists with the award of the “Milestone” for his life’s work.

We use cookies to enable you to make the best possible use of our website and to improve our communication with you. Make your personal preference here:

Individual cookies
Cookies: cookiebar; Provider: Hobby Caravan; Duration: 1 year; Data protection
These cookies are used to allow functions of the website that enable you to use the website as conveniently as possible and tailored to your interests. Furthermore, the analysis of user behaviour also helps us to continuously improve the quality of our website.

We use cookies to enable you to make the best possible use of our website and to improve our communication with you. We take your preferences into account and process data for analytics and personalization only if you give us your consent by clicking on "Agree and continue". You can revoke your consent at any time with effect for the future. You can find more information about cookies and customization options by clicking on the "Show details" link.